View the collection at hm.com on February 18th.

All good things come in threes. David Beckham, Kevin Hart and a brand new collection of modern essentials, for example.

The eagle has finally landed. After weeks in the editing room, the full-length film for our latest campaign Modern Essentials Selected by David Beckham is here. Press play and see it above.

After they finished shooting, H&M Life asked the two stars to share their experiences from working together and to let us in on some details of what happened off set. Oh, and it’s probably best to add a disclaimer – don’t take Kevin Hart’s answers too literally.

TELL US ABOUT YOUR RELATIONSHIP WITH DAVID BECKHAM, DID YOU KNOW EACH OTHER BEFORE MEETING ON SET?
“Well, I was a fan…like really a fan. David had to drop the restraining order so we could do this campaign,” says Kevin Hart.

This is the third film H&M and David Beckham have done together, but the first one where he’s not the only star – and is fully dressed. The film is about Kevin Hart preparing to take on the role of David Beckham for the upcoming movie I, Beckham (no it’s not actually upcoming, as far as we know).

DID YOU LEARN SOMETHING ABOUT YOURSELF AFTER SEEING KEVIN PLAY YOU?
“It’s always an interesting experience to see someone else’s view of how you are. I guess I’m not aware of having a particular pose or look, I’m just being myself. So it’s funny to see that my actions and the way I move are also part of my character. I’ve always thought it was important to not take yourself too seriously, and this campaign is the perfect chance to show why,” says David Beckham.

“He told me not to screw it up and he wished I was taller.

DID YOU GIVE KEVIN ANY TIPS ON ‘BEING DAVID BECKHAM’? DID YOU GIVE HIM ANY DIRECTION?
“Kevin doesn’t need any tips. His comedy is all about observation, and he noticed all the little things that I don’t even know about myself. Kevin is so instinctive and spontaneous, and reacts in the moment. I had the best time working with Kevin, and had to stop myself from laughing the whole way through the shoot. Keeping a straight face was one of the hardest jobs I’ve done.”

Perhaps the former soccer pro didn’t give any direction, but according to Kevin Hart he did ask for two things: “He told me not to screw it up and he wished I was taller.”

David Beckham’s two – obviously extremely serious – wishes aside, there was one thing that didn’t get a boost during the shoot.

“Well, being photographed side by side with David Beckham doesn’t do anything for the ego,” says Kevin Hart.

HOW EASY WAS IT TO IMITATE DAVID?
“It was very easy. The thing that David and I have in common is sexiness. It comes naturally to me.”

Meeting on set and being photographed together weren’t Beckham and Hart’s first encounter. But it seems the two got to know each other a lot better during the days of filming.

TELL US ABOUT YOUR’S AND KEVIN’S RELATIONSHIP?
“I’ve met Kevin before and we got along. Anyone who follows him on Instagram knows that he’s as funny in his downtime as he is on stage or screen. He can get me laughing just with a look. For this shoot, it was really important that we already had a chemistry, so that the comedy feels real,” says David Beckham.

“The thing that David and I have in common is sexiness. It comes naturally to me.”

KEVIN HART ON HOW EASY IT WAS TO IMITATE DAVID BECKHAM.

DO YOU HAVE ANY FUN MEMORIES TO SHARE FROM THE SHOOT?
“The coolest thing actually happened off set.  We are both proud dads so we were showing off our kids via FaceTime,” says Kevin Hart.

Now that the film is out, we’re just waiting for the collection to drop. The collection reaches from lounge to business wear, and David Beckham has picked all the items.

HOW DO YOU THINK THIS MODERN ESSENTIALS COLLECTION REFLECTS YOUR PERSONAL STYLE?
“When H&M asked me to pick my favorite pieces from their Modern Essentials collection, I was so excited because they’re exactly the sort of pieces that I love to wear right now. I love the traditions of menswear, and how they evolve over time. It’s great to see classic pieces with a fresh twist, like a new cut or cloth, mixing together tailoring with more casual styles. Each piece looks great on its own, and I can put them together in my own way to create my own personal style,” says David Beckham.

TELL US ABOUT YOUR FAVORITE PIECE IN THE COLLECTION AND HOW YOU WILL STYLE IT!
“I love every piece in the collection, but if I had to choose one, it would be the coat. It’s my first fall selection from Modern Essentials, so the first time I’ve picked a coat for the collection. This one is perfect, with a really sharp tailored line that creates a great silhouette. I love that the coat comes not only in black but also in camel, which is something that connects me to my London roots. I’m going to wear the coat all winter long, either over tailoring, or thrown on over a sweater and jeans.”

The collection lands in stores and online on October 1.

H&M ,confirmed that David Beckham is filming with comedian Kevin Hart for a new H&M campaign. The campaign is for the Modern Essentials Selected By David Beckham range, and will be released later in the year.

Check out the images the “twins” shared on their social media: 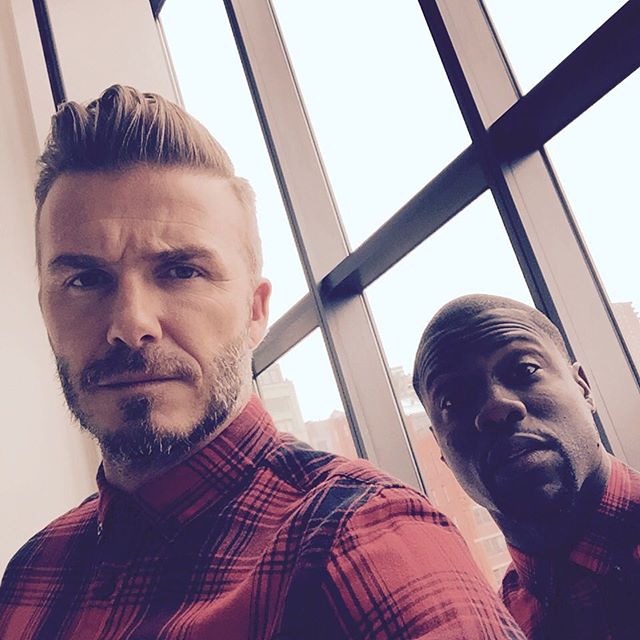 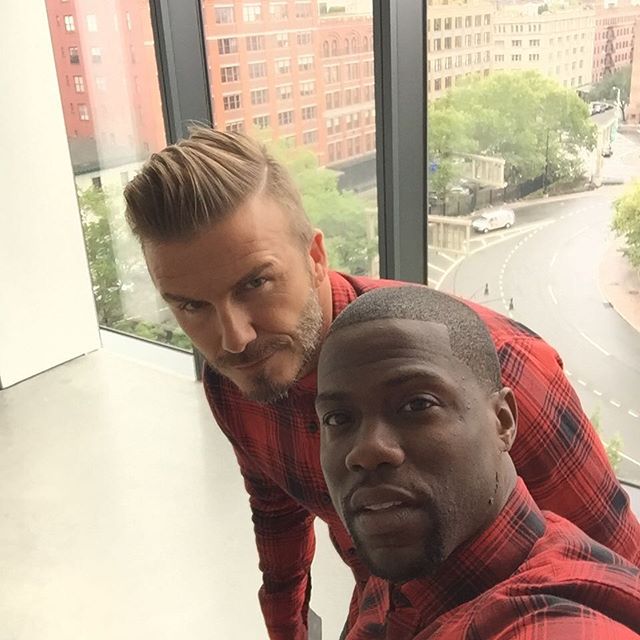